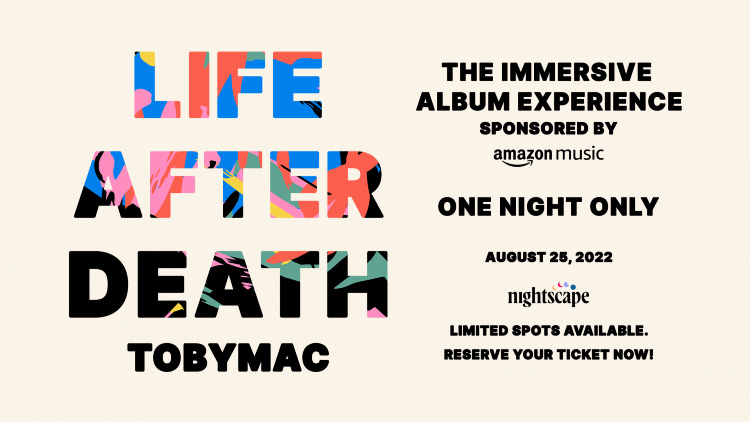 Available Not Available Sold Out
Confirm Time Slot
DESCRIPTION
On Thursday August 25th, join us for a free, one-night only, 360° immersive audio and visual experience of TobyMac’s brand new album LIFE AFTER DEATH. . Immerse yourself in the artwork from the record as you see & hear Toby’s story behind the album, highlighting special tracks and moments along the way.  Hosted at the Nightscape venue in downtown Nashville, you can expect a one-of-a-kind experience with exclusive TobyMac merch and unforgettable content!

LIFE AFTER DEATH is set to release August 19 and features 15 tracks, including previously released songs “21 Years” and “Help Is On the Way (Maybe Midnight),” which went #1 on five charts including the Billboard Christian Audience chart, and held on to #1 at Hot AC for 13 consecutive weeks.  Also featured is "Promised Land," the 3rd most added song at Christian radio in 2021, which peaked at #2 on the AC Indicator and AC Monitored Charts, and Top 5 on Christian Airplay. 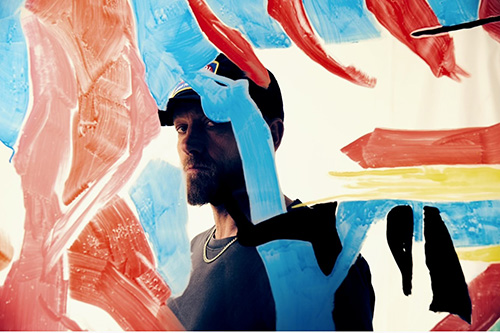 About TobyMac:
With more than 16 million units in career sales and a whopping seven GRAMMY® Awards, TobyMac's career continues on the fast track. His 2015 RIAA Certified Gold studio album, THIS IS NOT A TEST garnered a GRAMMY® Award and Billboard Music Award nomination on top of debuting at No. 4 on the Billboard Top 200. Each of his six studio solo projects have achieved Gold certification, a first for any artist in the history of his label, Capitol Christian Music Group. Among those is 2012's EYE ON IT, which debuted atop the Billboard 200, only the third Christian album ever to do so. THE ELEMENTS, his latest GRAMMY® -nominated, full collection of music, boasted "Everything," "Scars," "Edge of My Seat," "See The Light" and more alongside the chart-topper, RIAA Gold Certified "I just need U." His most recent singles, “21 Years,” “Help Is On the Way (Maybe Midnight),”  “Promised Land,” and "The Goodness (feat. Blessing Offor)," are all available wherever you stream music.