Your Valentine's Day plans just got a whole lot funnier!
Join the funniest stand-up comedians on the east coast for a night of raucous laughter. Whether you're boo'd up or flying solo, the Milton Theatre's pre-valentines show has you covered! 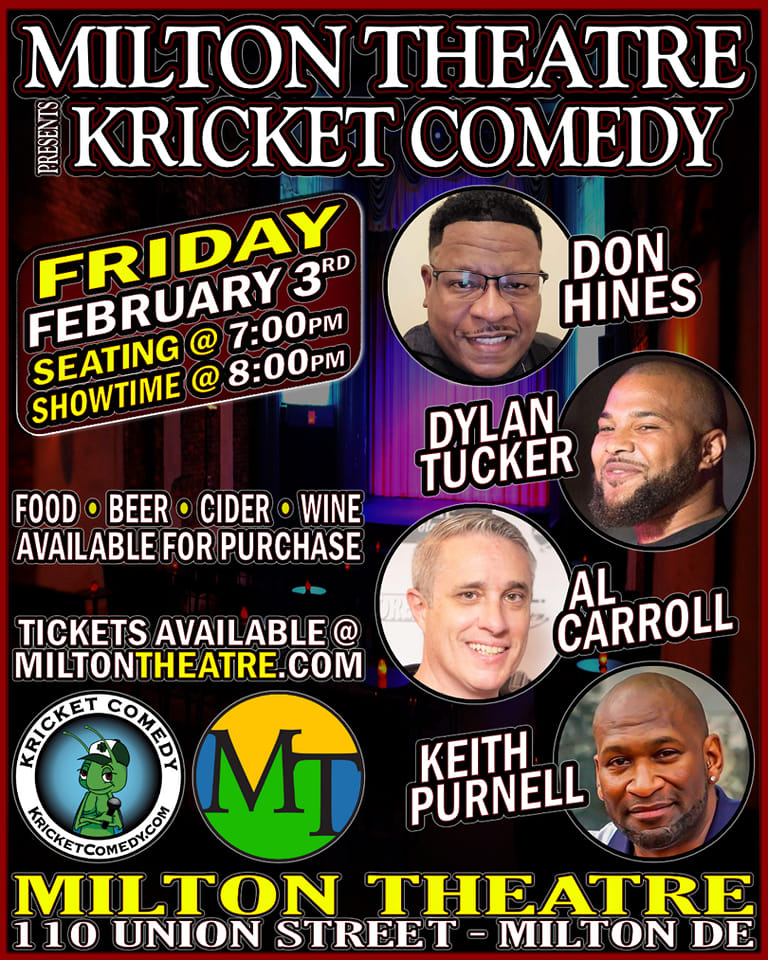 Don Hines AKA "JREAM" was blessed with the gift of comedy. He entered the Tri-State talent show at Delaware State University in 2005. The competition was fierce and he was the only comedian to perform against a wide variety of incredible talent. He won first place, and he has not stopped. Later in 2005, he gave his life to Christ and JREAM (Jesus Rules Everything Around Me) was born.

Dylan is a stand up comedian. He's been doing comedy for 6 years . He is hilarious and edgy. He's won several competitions and has opened up for a few D list celebrities.

From Tragedy Comes Pain and Comedy. Laughter heals and bonds people. Laughter brings communties together through grateful celebration and is the bridge to a better tomorrow! Al Carroll has rocked stages like the Comedy Cabaret in Philly, The New York Comedy Club, The Atlantic City Comedy Club, Magooby’s Joke House Baltimore MD, Dangerfields NYC, and the Taj Mahal Casino to name a few. His honest take on life and it’s changes over the last 50 years are not only jaw dropping funny, but eye opening as well.

Keith is one of the fastest rising comics from Delaware. He's a high energy performer whose quick wit, style, and fast pace humor make him a hit and personal favorite of audiences young and old. He performs at Comedy Clubs across the country and has appeared on Television and in Movies. He was a winner in the Howard Stern "Kill or Be Killed" Comedy Competition and was the Philadelphia Regional winner in the Sierra Mist Next Great Comic Comedy Competition. Keith has had appearances on Last Comic Standing and is gaining a reputation as the next rising star. So watch out America, he's coming your way, be prepared, he's armed with Laffs!