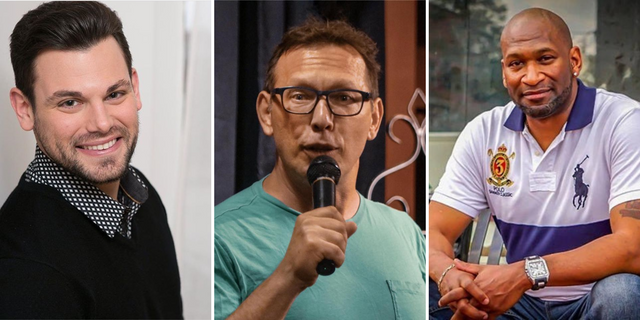 New Jersey’s Not-So-Tough-Guy Comedian, Johnny Watson comes under many descriptions: Dynamic, Relatable, Professional, and most important of all, Very, Very Funny. Johnny Watson is a nice guy comedian who can perform anywhere and under any circumstance. Once Johnny finds his “zone” he’s all there.

Website | Facebook | Youtube
Steve Rinaldi’s comedy career started when he decided to sign up for an open mic night in his hometown of Philadelphia back in 2012. From there he would go out night after night working on finding his comedic voice at local bars and comedy clubs around the Philadelphia area. In 2015, Steve made his way out to Chicago where he took improv classes at both the Second City & IO. Steve worked Chicago comedy clubs like Laugh Factory, Zanies, & Jokes & Notes. He now performs regularly at the Funny Bone Comedy Clubs up north, and has became a regular in the Atlantic City Comedy scene. Steve brings you into his world of “South Philly Italian” which means topics consist of a lot of family, relationship, and disfunction throughout his set.

Keith is one of the fastest rising comics from Delaware. He's a high energy performer whose quick wit, style, and fast pace humor make him a hit and personal favorite of audiences young and old. He performs at Comedy Clubs across the country and has appeared on Television and in Movies. He was a winner in the Howard Stern "Kill or Be Killed" Comedy Competition and was the Philadelphia Regional winner in the Sierra Mist Next Great Comic Comedy Competition. Keith has had appearances on Last Comic Standing and is gaining a reputation as the next rising star. So watch out America, he's coming your way, be prepared, he's armed with Laffs!