This website uses cookies and other tracking technologies to better personalize your browsing experience, to analyze website traffic, and to present you with targeted content from the partner venues and organizations you visit on etix.com.
By selecting "Allow", you consent to the use of these cookies and other tracking technologies.
Allow Do Not Allow 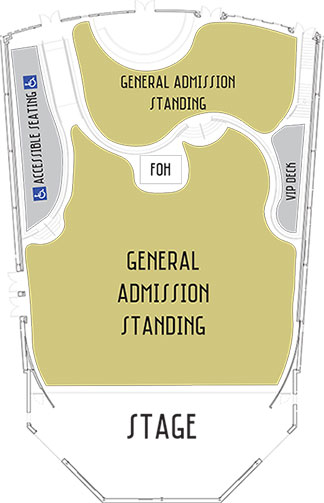 Emerging as a trailblazing name in the mid-'90s emo scene, Jimmy Eat World eventually found a larger audience by embracing a blend of alternative rock and power pop that targeted the heart as well as the head. The band's influence widened considerably with 1999's Clarity -- an album that has since emerged as a landmark of the emo genre -- but it was the band's follow-up, 2001's "Bleed American" and the infectious single "The Middle," that broke them into the commercial rock mainstream. The emo label proved difficult to shake throughout the 2000s, even when subsequent Top 10 albums "Futures" (2004) and "Chase This Light" (2007) did little to evoke the hard-edged sensitivity of Clarity, but Jimmy Eat World still remained a league above the generation of genre torch-bearers they helped spawn. Settling into comfortable veteran status in the 2010s, the band continued to issue reliable Top 20 efforts, rounding out the decade with their 10th album, 2019's "Surviving." The Clyde in Fort Wayne is a stop on Surviving, The Tour making its way through the country in celebration of this new album.

Nurturing arena-sized ambitions, White Reaper remind us that "fun as hell" is a primary purpose of music. Equal parts glam and grit, White Reaper's forthcoming Elektra Records debut finds the band packing classic rock with grinning twin guitar leads into masterly crafted pop songs. Expected later this year, the album will follow 2017's critically acclaimed "The World's Best American Band," which was praised by Pitchfork for having "more riffs than you can fit into the trunk of a Camaro." White Reaper recently treated fans to an early taste of new music with the release of their brand new single "Might Be Right."

Enjoy your next concert in style! Our VIP Gallery is a distinctive and desirable space within the Clyde Theatre, offering upscale ambiance, eye-catching décor, a high level of service, and exciting energy. With easy access from the main floor, a balcony overlooking the entire venue, a VIP bar, and a spacious social area, the VIP Gallery offers you a truly unique live music experience. Reserved seating is available in our Balcony area and Box Suites.

To purchase the VIP Gallery experience, please contact our VIP Coordinator at vip@clydetheatre.com or 260-747-0989 x 8590.

*Must also purchase a valid show ticket; VIP Gallery pass does NOT grant you entry into the venue.